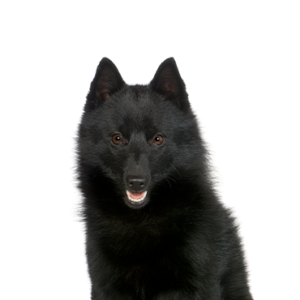 The Belgian “shepherd” dog is a small companion that has proved its worth over time in military and civilian fields. Formerly referred to as Spitzke, the Schipperke exudes so much energy and as such, is known for its agility. Discover more about our Schipperke puppies for sale below!

The Schipperke (originally pronounced “sheep-er-ker” but commonly pronounced “skip-er-kee” in America) was probably used during hunts and fishing expeditions as most of the early information surrounding the breed were from articles on hunting and fishing. After years of its existence and being called different names, it was finally accepted as a breed in the early 1880s. It was not until 1889 that its defining characteristics were compiled and published.

Some articles relate the Schipperke to the Spitz but they are two different breeds. It is a descendant of the Leauvenaar which was also a shepherd dog exclusive to a province in Belgium.

Although the Schipperke exhibits a high level of submission to its master, it is a difficult and mischievous dog, always seeking avenues to cause trouble. Little wonder it is also called “the little black devil”.

Nonetheless, their troublesome traits can be managed with consistent training and supervision after which they would become reliable but only to an extent because on some other days, they may reconsider their allegiance. Their ability to do this is also seen in the way they investigate whatever tickles their fancy. They would employ all their skills in satisfying their curiosity which is sometimes to their detriment.

When the Schipperkes are around other dogs, they lose all the training they ever had. Their small size doesn’t limit them from trying to intimidate other dogs by barking and making aggressive moves. For a dog lover planning to buy a Schipperke, it would a bad idea to have other dogs around and unless one possesses some experience in dog training and grooming, buying a Schipperke could be a wrong move.

Due to their high energy levels, the Schipperkes are not to be caged. They need an environment with adequate space to allow them to run around and satisfy their hunger for trouble but this should also be properly fenced to prevent them from taking the trouble outside.

With all the details provided already, it is apparent that the Schipperke loves to “work out” hence, their owners should be lovers of workouts too. The space in the yard should allow them to do some exercise but it is also essential that they are taken out at least once a week.

Activities that involve thinking and sourcing are also good ideas for exercise because of how independent and curious the Schipperkes are. If allowed to explore, they should be kept under close watch as they may wander far off just to get answers to the questions they may have.

For a furry dog, Schipperkes are relatively cheap to maintain. Their grooming process requires little to no specialty in dog grooming. The basics are a brush to keep the fur looking healthy and a nail clipper to trim the length of the thick nails on their paws.

The only major concern arises when they begin to shed their undercoat which only happens twice or thrice a year and maybe more in females. When this happens, warm baths should be taken to help remove the coat faster instead of letting it litter the whole yard. Regular brushing at this time would also help in getting out the blown coat.

The unregulated breeders who are selling outside of the USDA regulations and without a license are what we consider to be “Puppy Mills.” We are committed to offering Schipperke puppies who will grow up to become important members of your family. We only purchase puppies from the very best sources, and we stand behind every puppy we sell.

Frequently Asked Questions about the Schipperke

Do Schipperke shed a lot?

Not a lot. They made shed twice, thrice or a couple more times but not as much as other shepherd dogs. Besides, most of their fur is around their neck.

Almost always. This is why most of the Schipperkes seen online do not have tails but in countries where docking is not allowed, they have the privilege of showing off their bobtails.

Do Schipperke eat a lot?

Yes, they do which puts them at risk of becoming overweight.

How many puppies can Schipperke give birth to?

A Schipperke can give birth to as many as seven puppies in one litter.

How tall can Schipperke get?

The most a Schipperke can grow to is 13 inches. The females top somewhere around 12 inches.

Are all Schipperkes black?

Most Schipperkes are covered with black fur but they could also come in blonde, chocolate, blue or apricot colors.

What is the Schipperke life expectancy?

A healthy Schipperke is expected to live as long as thirteen to fifteen years.

Yes, they are. They exhibit a high level of intelligence and inquisitiveness.

What are Schipperkes used for?

Owing to their agility, Schipperkes are often used as watchdogs and guards at home.

Watch our video on Schipperke puppies